Today marks the third anniversary of the day we lost our first baby.  Squooshy was a surprise of hope for us – we had almost given up on ever getting pregnant!  The day I found out I was pregnant is still one of my favorite days, even though it is now tainted with the knowledge of how it all ended.  I thought I was having serious heart problems or something.  I was so tired all the time.  I was sick at my stomach.  I could feel my heart racing at times.  On July 1st,  called Dr. Wilk on my way to work to make an appointment.

That afternoon he made me pee in a cup, even though I told him “I never pass these tests.”  I can still hear him coming back into the room and saying, “How do you feel about being a mother?”  I was shocked.  SHOCKED!  After years of trying (temperatures, calendars, drugs, etc.), I was still surprised to find out that I was pregnant.  God is so funny sometimes!  I sobbed in his office, and he and his nurse hugged me over and over again.  I remember the moments when I told my parents, my siblings, my friends, my coworkers.  It was a great time.

It has been a difficult three years since that day.  Three more miscarriages have followed – each one painful and difficult, but none have been quite as devastating as the first.  Perhaps we just have become desensitized to it a little.  We remain hopeful for a family – no matter how it may come.  In the meantime we enjoy being an aunt and uncle to 5 amazing nieces and nephews.  They bring such joy to our lives.

I just wanted to take a moment to remember our first little baby.  Squooshy, we dream of you often, and we know that someday we will get to hold you in our arms… 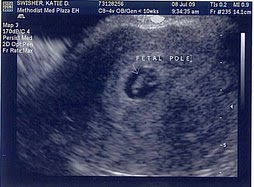